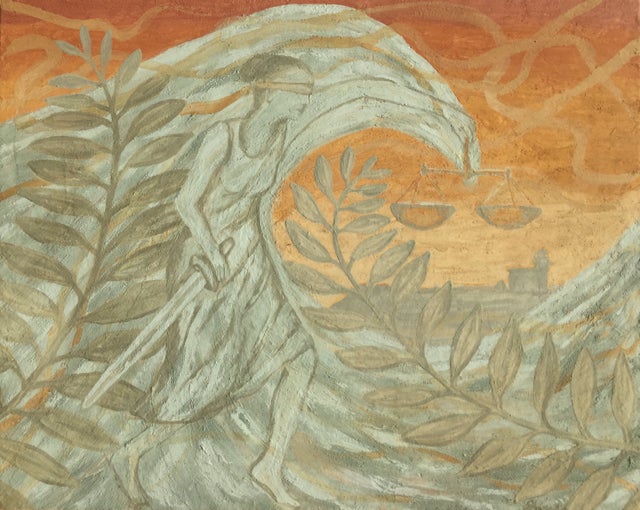 Canvas print of original. This was a commissioned piece for a local judges chambers. Painted with foraged soil pigments on wood panel, 16”x20” ...Iusticia, Lady Justice, the goddess of Justice within Roman mythology. Iusticia holds the scales of justice in one hand and the double-edged sword in the other. She wears a blindfold as a symbol of impartiality. She is often depicted with elements of earth (the cliff below the lighthouse) and air (the ribbons shown in the sky) showing a balance between the earth and the heavens. The judge this is made for is a surfer, often spotted at Steamer Lane in Santa Cruz (notice the lighthouse in the background) thus she is in the wave. The leaves are olive leaves, symbols of peace, which are often depicted around the scales of justice. Here, they could also be kelp. While painting this, I felt that this is also a painting related to climate change. The sunset colors of the sky, the rising sea holds the scales of justice over the small lighthouse (lighthouses are a symbol of human hope and safety.) Olive leaves of peace stretch between impending wave and lighthouse/scales. Other sizes available on request.